Already in the 13th century the Sicilian Guido de Columnis wrote his Historia destructionis Troiae which was translated into numerous languages. The present manuscript with its enchanting miniatures originated in Regensburg (Germany) of the 15th century and the Romance of Troy may be considered as a handbook for the courtly world of the Middle Ages.

A picture book of Troy’s downfall

Hardly any other ancient legend exudes, even today, the same fascination as the story of the downfall of Troy. The episodes of the abduction of Helen, wife of the King of Greece, by her lover Paris, the dramatic battles between the heroes Hector and Achilles, and not least the outwitting of the inhabitants of Troy by using the Trojan Horse are all part of our cultural identity. The legend of Troy, however, was particularly dear to the aristocratic world of the Middle Ages, when countless noble families invented Trojan ancestors, ascribing their own genealogy to different heroes of Troy.

Popular translation of the Romance of Troy

The popularity of the legend in the Middle Ages was thus less based on Homer’s or Virgil’s epics anchored in the world of pagan deities than on alleged eye-witness reports that pretended to reproduce the events on the battle-fields in all detail. This was also the source for the Sicilian Guido de Columnis whose Historia destructionis Troiae achieved incredible fame in the 13th century and was translated into numerous languages. 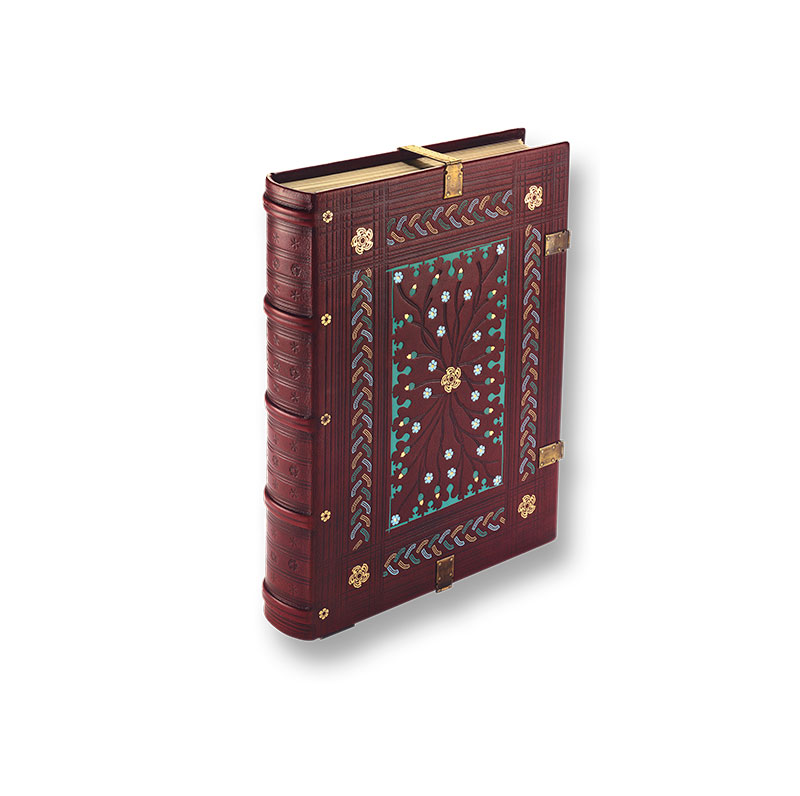 The longest cycle on Troy

The facsimile edition of Vol. 2773 in the Austrian National Library presents one of the most unusual Troy manuscripts dating from the late Middle Ages: although a word-for-word translation of Guido’s Romance of Troy, the volume is above all intended as a picture book. Its 334 miniatures on 478 pages in the format 27.5 x 37.0 cm comprise the most extensive Troy Cycle of the German-speaking world and enable the user to experience the entire heroic tale, from the Legend of the Argonauts to the tragic death of Ulysses.

The initial makers spared no expense in producing the manuscript. The translation was done especially for this purpose, the text written down in textura, a highly representative book hand. The special charm of this manuscript is not least due to its enchanting miniatures.

Handbook of the courtly world

The Romance of Troy may be considered as a handbook for the courtly world of the Middle Ages. In addition to the battle scenes which, in spite of their drastic bluntness, rather convey a romantically transfigured image of medieval fighting, the manuscript is above all intended as the presentation of a courtly society, its universe, customs and rituals, thus making the book an outstanding source of information about medieval court ceremonial.

A signature in Gold characters

With the words Martinus opifex (»Martin, creator of this work«), the Illuminator has immortalized himself in gold characters on the first page – nothing comparable has been found in any other manuscript so far! Lucky circumstances allow us to identify this name with the book illuminator Martin, who was working in Regensburg from 1432 to 1456.

It is certainly no coincidence that Regensburg developed his talent, as the old Royal Palace was one of the most important centers of illumination in the Middle Ages. Masterpieces such as the monumental Ottheinrich-Bible were created in the workshops.

His idiosyncratic, concise style makes it possible to attribute to him more manuscripts. He was highly esteemed among his contemporaries – so he took in the 1440s at the Vienna court a leading position and contributed to the painting of two codices for the German king and later Emperor Frederick III. 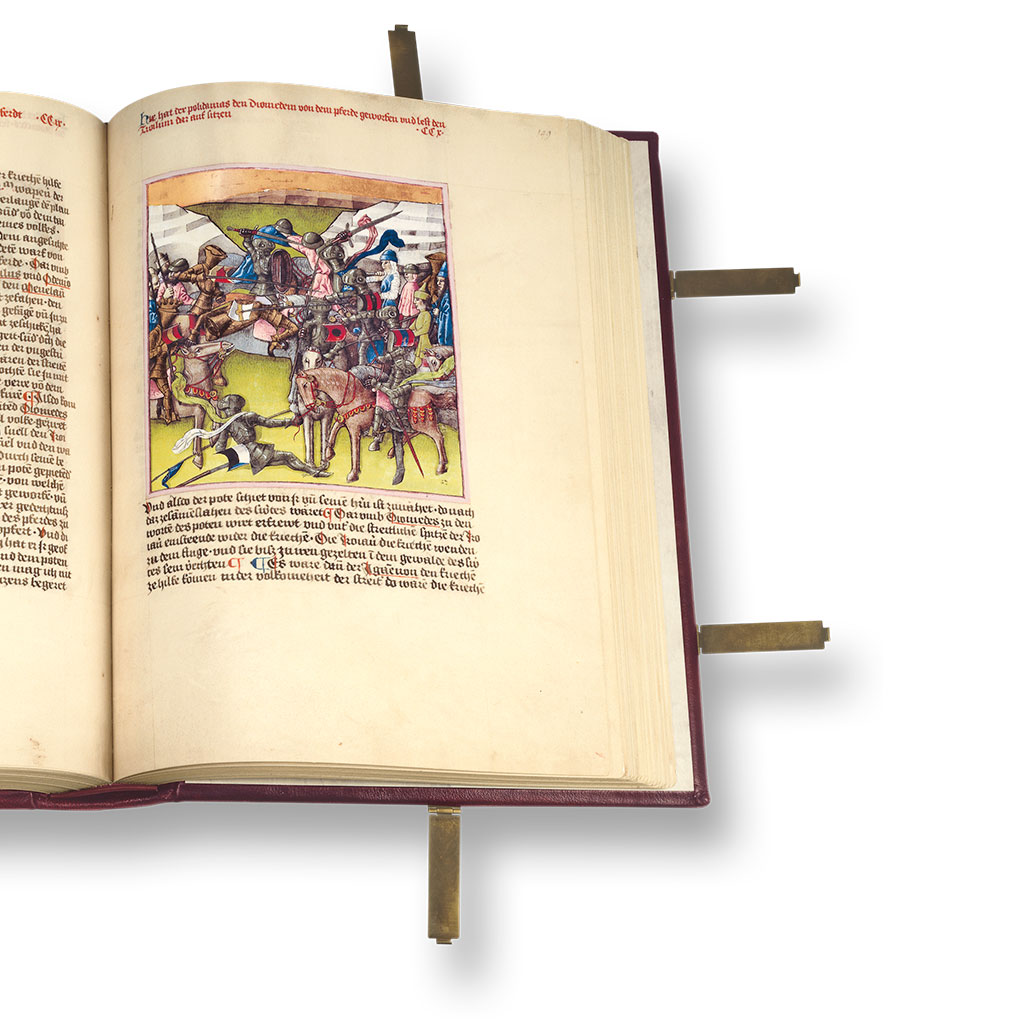 An illuminated manuscript for 15 kilograms of silver

Despite its high level of equipment and standards, the manuscript contains no indications of its addressee. The book initially remained in the possession of the artist. His widow sold it in 1456 to the City Council of Regensburg for the handsome amount of about 15 kilograms of silver. Only as a gift to the imperial chancellor the Codex came to Vienna and so later in the possession of the Habsburgs, and belonged also to Emperor Maximilian I.

From about 1574, the Vienna Troja romance was kept as part of the library Ferdinand II at Ambras Castle in Tyrol, from where he was then transferred together with a large part of the Ambras collection back to Vienna. Except for the cover, which had to be renewed in 1951, the Codex has been preserved completely and in an excellent condition.

The precious leather binding with whirl rosettes in real gold

The binding of the facsimile edition has been modelled on the binding of a late medieval calendar manuscript dating from 1481, now in the Austrian National Library, Vol. 2683 from the studio of Ulrich Schreier, a bookmaker in Salzburg. The leather binding has four clasps and is decorated with blind toolings (line tool and single stamp coloured motifs). The corners of the frame and the centre of the book cover are each set with a whirl rosette in real gold. The book spine is made of five raised bands.

The facsimile and commentary volume come in a joint case with acrylic cover. This allows a suitable presentation of the noble binding.

The scientific commentary: Your key to the manuscript

The scientific commentary was written with the participation of renowned manuscript experts: Karin Schneider and Norbert H. Ott (Munich), Katharina Hranitzky (Vienna) as well as Gude Suckale-Redlefsen and Robert Suckale (Berlin). For the first time ever, there is an in-depth scholarly study of this manuscript.

This website uses cookies to improve your experience while you navigate through the website. Out of these, the cookies that are categorized as necessary are stored on your browser as they are essential for the working of basic functionalities of the website. We also use third-party cookies that help us analyze and understand how you use this website. These cookies will be stored in your browser only with your consent. You also have the option to opt-out of these cookies. But opting out of some of these cookies may affect your browsing experience.
Necessary Always Enabled

Any cookies that may not be particularly necessary for the website to function and is used specifically to collect user personal data via analytics, ads, other embedded contents are termed as non-necessary cookies. It is mandatory to procure user consent prior to running these cookies on your website.