The most precious medieval Book of Hours and a crowning achievement of Parisian book painting, this manuscript originates from the early 15th century. The elaborate decoration, the understanding of perspectives and their depiction, and the expressive mimicry of the people portrayed are all proof of the incredible innovational energy of the “Bedford Masters”. 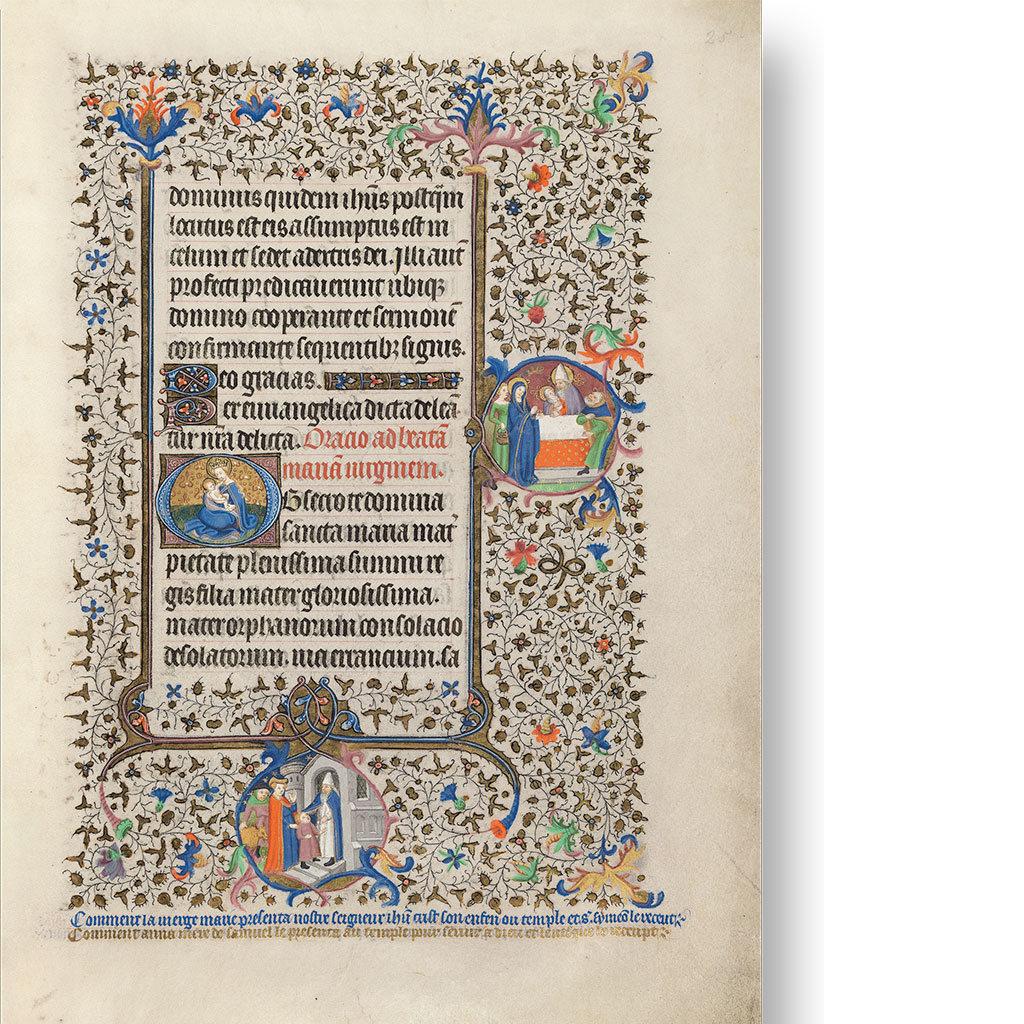 The Bedford Hours represent an invaluable example of aristocratic bibliophily in the history of illumination. One of the richest Books of Hours ever to have left an illuminator’s workshop, it became famous all over the world. Miniatures from the Bedford Hours, such as the Ark of Noah or the Creation, are among the most frequently represented examples of the creativity which marked the first decades of the 15th century. It was the heyday of Gothic illumination, with new ideas of Flemish realism already visible on the horizon.

Incredible wealth: 1288 images and gold on every single page

With their 578 pages in the format 26.3 x 18.4 cm, the Bedford Hours constitute an unusually extensive painted manuscript. With 1250 elaborate medallions, 38 large-format miniatures, all decorated with gold leaf, brush gold and frequently also with silver, different owners’ arms and three historiated initials, the Bedford Hours unfold in splendour, making them one of the most precious manuscripts of their time. 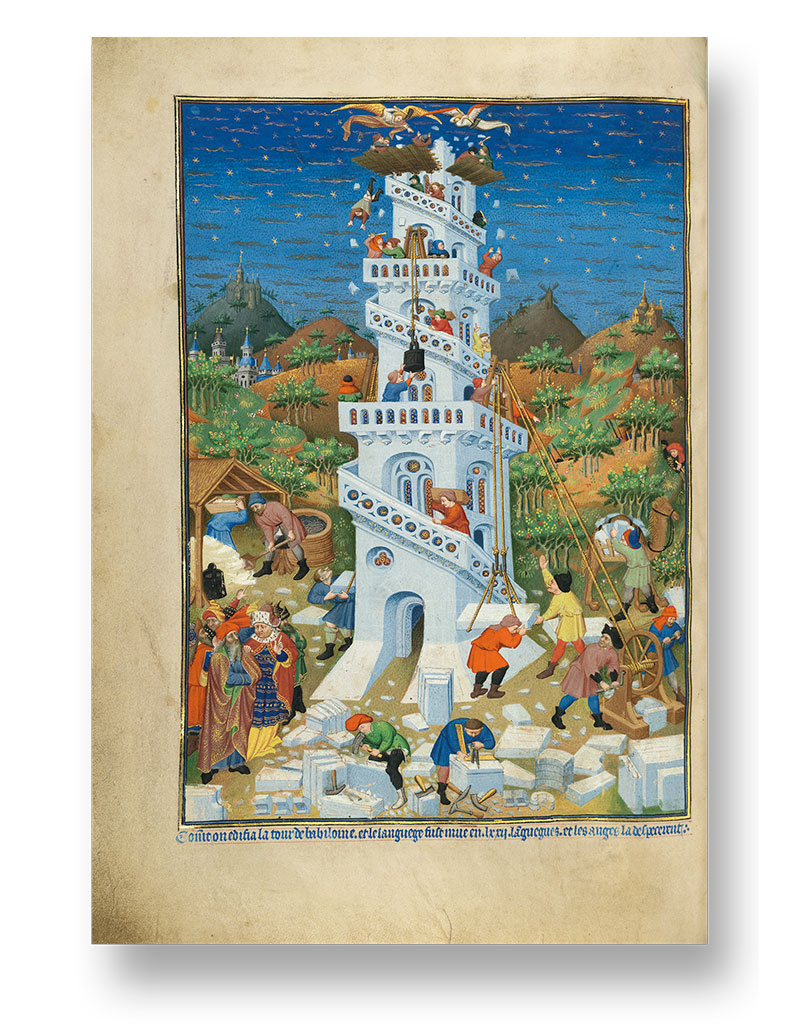 Every single page is illustrated! This magnificence is further enhanced by splendid scrollwork, with hundreds of tiny golden vine or acanthus leaves, colourful flowers and small animals covering the pages. The Latin text is embellished with numerous gold initials and imaginative line-fillers, while French explanations of the miniatures appear in red, blue, and gold writing at the bottom of each page.

The Bedford Hours are today preserved in London, as one of the most magnificent art treasures of the British Library, and stand out among its manuscripts, a work of ultimate luxury.

The Bedford Master: One of the greatest illuminators of all times

The Bedford Hours rank among the prime achievements of late Gothic Parisian illumination. They were entirely made by the ingenious Bedford Master who painted most of the miniatures himself and gave clear instructions to his helpers for the others.

Although the artist of the Bedford Hours was among the leading and most prolific painters of his day, his identity has surprisingly remained a mystery. His nickname goes back to the Duke of England who has long been thought to have commissioned the work: John of Lancaster (1389–1435), Duke of Bedford and younger brother of the English king Henry V. The illuminator of the Book of Hours thus entered art history under the title of Bedford Master, a name synonymous with high quality painting and luxurious opulence in books. The artistic exchange with the Boucicaut Master From c. 1410 onwards, this talented painter remained one of the greatest illuminators in Europe for more than a quarter of a century. Although inspired by the genius of the Limburg brothers, he enriched their work by adding countless new elements. And he set great store by the exchange with other workshops. E.g. the Book of Wonders containing Marco Polo’s travel account was the result of a close cooperation between the Bedford Master and the Boucicaut Master. 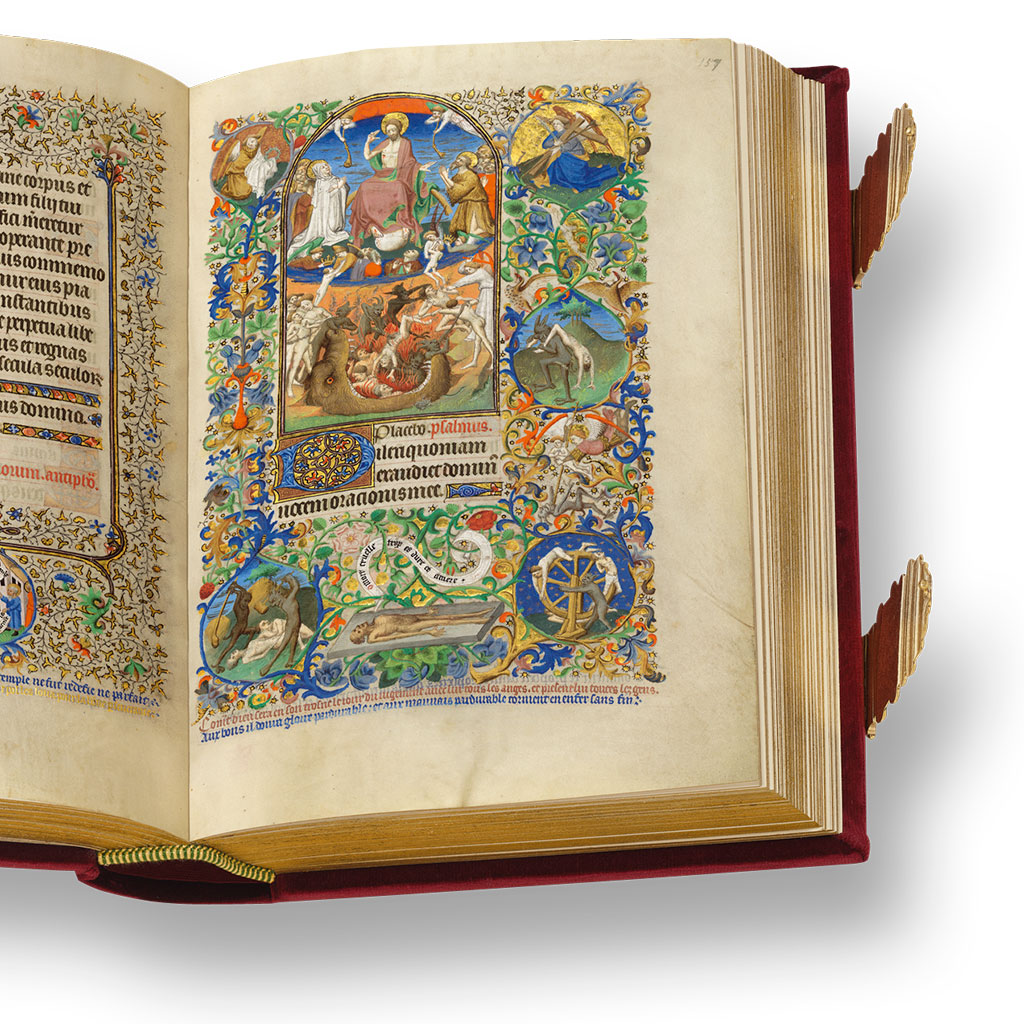 Even today, we can still feel the artist’s love of nature and his marked sense of observation, if not curiousness about the world around him. Despite a number of purely decorative elements, we are above all fascinated by his sense of perspective, of expansive landscapes and architectural contexts, an intuition that foreshadows the art of a then still distant future. Famous miniatures, such as the Tower of Babel – a building site populated by countless zealous workers – bear testimony to the Bedford Master’s exactness and love of detail.

The Bedford Master is also famous for the elaborate depiction of figures – small masterpieces of portrait painting. Their vestments with their softly swinging drapery folds as well as their faces display a strong three-dimensional quality. The brush of his stroke lends the figures different facial expressions.

The King’s brother as patron and commander

The Bedford Hours were made at a time when France and England had been waging war for some decades; and it was the Duke of Bedford who then, in alliance with Burgundy, successfully fought the cause of the English: the accession to the French Crown. It was this man who conquered half of France and eventually stopped the troops of Joan of Arc. He also married Anne of Burgundy, the daughter of Duke John the Fearless, thus gaining access to the art-loving Burgundian aristocracy, and ordered numerous luxuriously illustrated manuscripts himself. He died in 1435 in Rouen.

A magnificent book for a great love

Anne must have received the Bedford Hours as a precious wedding gift from her brother Philip who had inherited it from his father John the Fearless, the initial patron of the book. This marriage of convenience between the Duke of Bedford and Anne of Burgundy soon turned into a great love. In the end, after Anne’s untimely death, contemporaries admired the Book of Hours, whose production must have cost a fortune, as a precious symbol of their deep affection. A lover of books as the Duke of Berry The Duke of Bedford owned a great number of other manuscripts which were among the most luxurious volumes of his time. His generousness when purchasing works of art clearly reminds us of the Duke of Berry. It was thus only normal that John of Lancaster followed in the footsteps of the great French bibliophile collector after his death and became himself an important patron of France.

578 pages in a velvet binding with gilded clasps

The Bedford Hours are now published in a worldwide limited Fine Art Facsimile Edition of only 980 copies. All 578 pages are faithfully reproduced in the format 26.3 x 18.4 cm and trimmed to match the original book. In a faithful recreation, the Fine Art Facsimile volume renders even the finest details of the shining gold leaf and the softly shimmering brush gold as well as the silver parts.

The red velvet binding includes two gilded clasps that are additionally decorated with fine engravings, reproducing the arms and mottoes of the great English bibliophile Baron Harley. The contents binding with its hand-stitched two-coloured head-cap is furthermore gilt-edged in a distinctive brush gold.

Faksimile Verlag was able to engage Professor Eberhard König, art historian at the Freie Universität Berlin and long-standing expert in illuminated French Gothic manuscripts, for the scholarly commentary of the Bedford Hours. Professor König will introduce you to the captivating period of the early 15th century, as well as to the art of the Bedford Master and his contemporaries. Since the Bedford Hours have never been the object of a profound study, the scholar was able to unveil some of the mysteries of their splendid miniatures and the extensive series of medallions in their marginal decoration!

The Fine Art Facsimile Edition is delivered in an acrylic glass case, protecting and presenting the Bedford Hours in an adequate form.

This website uses cookies to improve your experience while you navigate through the website. Out of these, the cookies that are categorized as necessary are stored on your browser as they are essential for the working of basic functionalities of the website. We also use third-party cookies that help us analyze and understand how you use this website. These cookies will be stored in your browser only with your consent. You also have the option to opt-out of these cookies. But opting out of some of these cookies may affect your browsing experience.
Necessary Always Enabled
Necessary cookies are absolutely essential for the website to function properly. This category only includes cookies that ensures basic functionalities and security features of the website. These cookies do not store any personal information.
Non-necessary
Any cookies that may not be particularly necessary for the website to function and is used specifically to collect user personal data via analytics, ads, other embedded contents are termed as non-necessary cookies. It is mandatory to procure user consent prior to running these cookies on your website.
SAVE & ACCEPT